In winter 2018/2019 I wanted to build another nesting box (a half-cave nesting box was planned). However, my plans had changed after I had built a feeding box for our native squirrels in late autumn 2018. Then I had the idea to build an additional nest for the squirrels.

The squirrels build nests in trees and use them as living room, bedroom and nursery. It is also possible to offer the squirrels a little house as a nest, which they can use as a sleeping place.

I liked the idea of being able to observe a squirrel in a self-built nest with a camera. For this reason my plan to build a nesting box was modified and a self-built squirrel nest was created.

The house consists of 2 parts. One is the “living room” for the squirrel with balcony 🙂 and the other is the setup for the camera technology.Very important for the construction of a squirrel nest is that the nest has at least 2 holes as entrance or exit. Squirrels are escape animals and need, if an entrance is besieged by an enemy like the marten, an alternative exit as escape route. In my case there is one exit on each of the narrow sides and one exit to the front to the “balcony”, over which the squirrel can escape to the back. The diameter of the holes is 7cm, so that even a pregnant squirrel can pass through.Because I have the vague hope that a female will use the nest in spring as a nursery 🙂
The base plate of the house consists of a 40cm x 50cm 18mm thick board, on which the living room with a base area of approx. 29cm x 39cm is placed. The front panel of the living room has a height of 25cm, the back wall of 30cm, accordingly the side walls are bevelled.

The camera used is an IP camera. The camera sits in the additional box I put on the roof of the living room. Since I have enough space in the structure, I did not need an alternative power supply in this case, unlike the titmouse nesting boxes, but could use the included power supply.
I attached the camera to a board using the existing mounting holes for the holding foot.
The used camera has a line-in connector for an external microphone. Therefore I also used a microphone of course. Unfortunately Amazon did not deliver the ordered microphone in time (I wanted to hang up the nesting box on the 2nd of January weekend), so I hung up the nesting box without microphone for the time being.
A few days later the ordered microphone arrived. But unfortunately I had to realize that the microphone did not really work on the camera. Basically there was sound, but much too quiet. Therefore I had to order another microphone. After a short test the microphone was found to be suitable and was mounted firmly. And so the microphone is now also hanging in the interior

I provide the live streams on the website with the help of the free software “Restreamer”. The software runs on two Raspberry Pi 3 (each Raspberry 2 cameras) and provides the streams in the embedded player. A really very simple and fast solution to integrate RTSP camera streams into a website.

Therefore a big thank you to the team of Livespotting for their support!

In order to make the squirrel a little bit comfortable, I have already provided for the appropriate basic equipment in the house. I padded a little bit of wood wool with some kapok absorbent cotton and put it in a corner of the Kobel. I hope this has a little attracting effect on the squirrel.

And so it is to be hoped that one of the squirrels resident here will discover the nest as a new home and move in. I would be very happy in any case.

Also here – should I have awakened your desire to do handicrafts and you would like to rebuild the house, you can contact me if you have any questions. Just use the contact form.

2nd update: Yes, the wood wool and kapok wool that I had put in the house for the squirrel had quite an attracting effect. Only not on the squirrel, but on a tree bumblebee queen who decided to establish her bumblebee state in the nest. And so a bumblebee nest grew up in the house in spring 2019…

Unfortunately, the squirrel house is not a suitable place for a bumblebee nest, because of the large entrances, any animal that does not like the nest has easy access. And so it came as it had to come.
The first “enemy” of the tree bumblebee was the wax moth. The wax moth lays its eggs in the bumblebee nest and the larvae then eat their way through the honeycombs in the nest, destroying the brood. Normally bumblebee houses have a small flap in front of the entrance, which keeps the wax moth away from the nest, but can be passed by the bumblebees.

And as if that wasn’t enough, the nest was really upset a short time later.
First the titmice became aware of the nest. They regularly came into the goblet and rummaged the nest in search of something edible and opened it layer by layer. In the night they were joined by a mouse, which also rummaged through the nest looking for small edible animals.
And so, unfortunately, the end of the bumblebee colony came quickly. 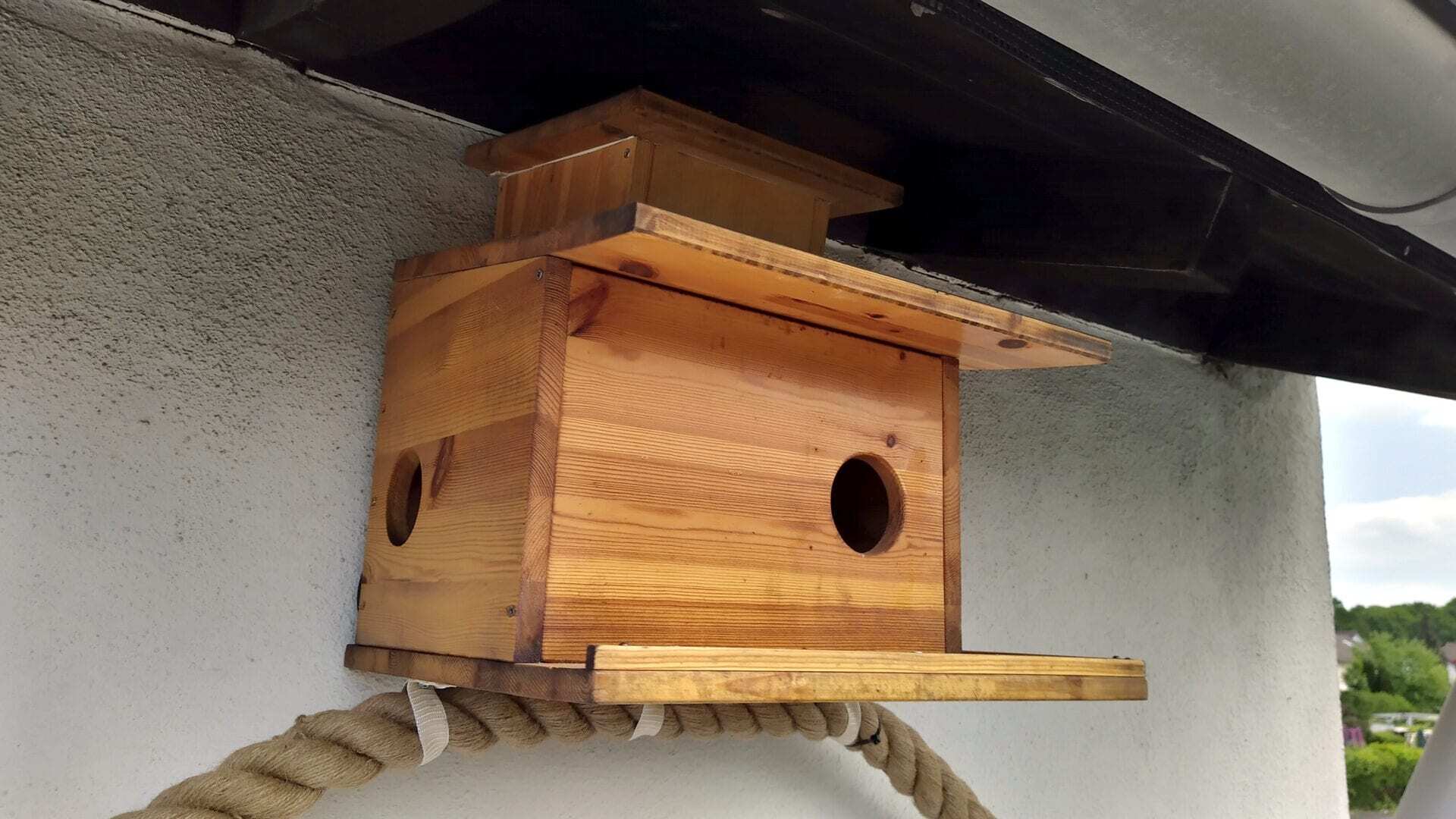 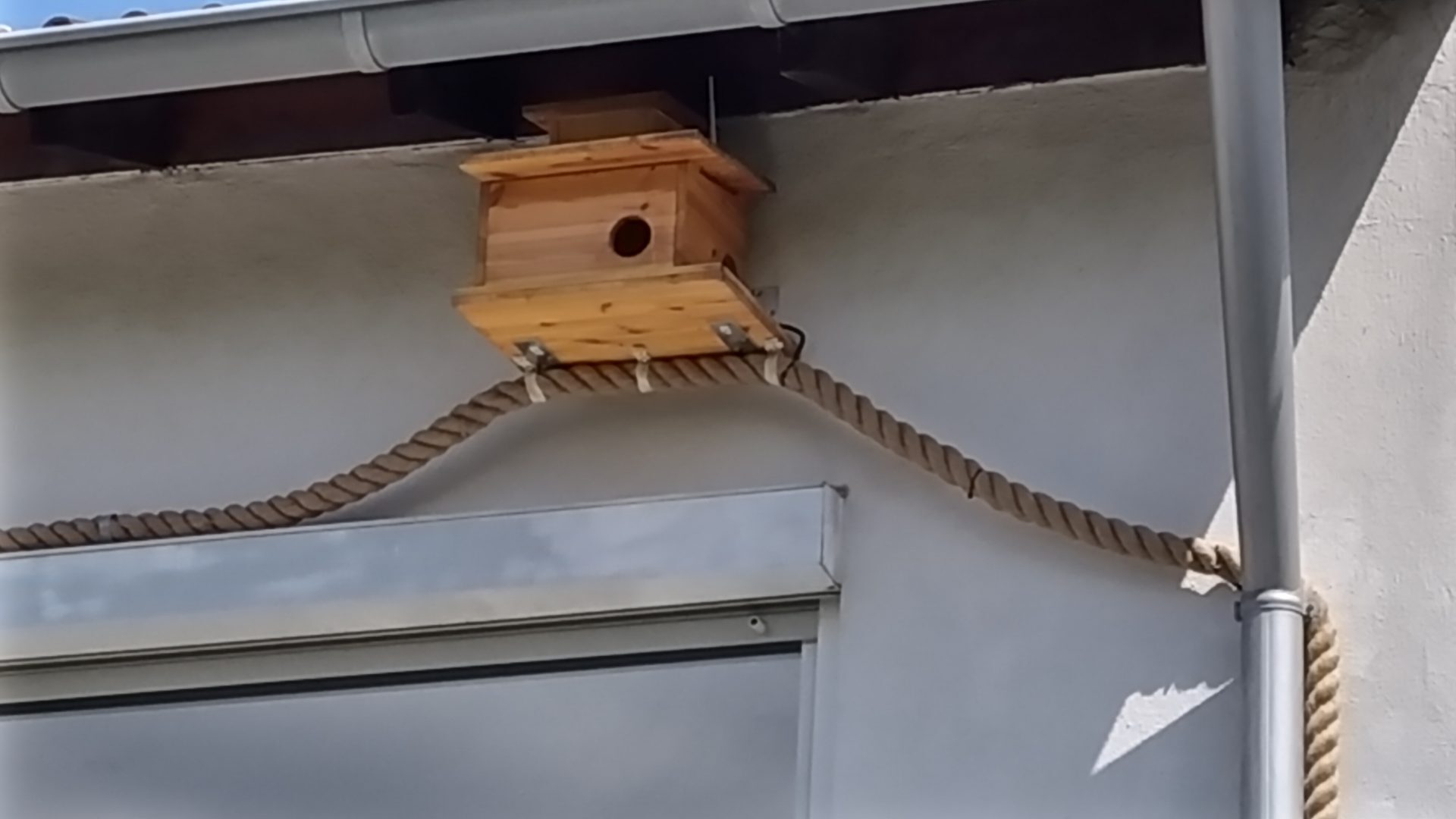